While the United Nations can be – and, in many respects, is – a force for good, the U.N. system since the early 1970s has engaged in programs to defame and delegitimize one of its member states, the State of Israel.

It maintains an anti-Israel infrastructure – founded in anti-Zionism, at the behest of the Soviet Bloc and Arab nations – that exists for the sole purpose of condemning Israel and, in doing so, contravenes efforts to attain a viable Israeli-Palestinian peace agreement.

Specifically, three elements — the UN Committee on the Exercise of the Inalienable Rights of the Palestinian People (CEIRPP), the Division for Palestinian Rights (DPR), and the Special Committee to Investigate Israeli Practices Affecting the Human Rights of the Palestinian People and Other Arabs of the Occupied Territories (SCIIHRP) — exist solely to undermine Israel’s security and economy and delegitimize the Jewish state.  These entities’ endorsement of the Palestinian claim of a “right of return”—in effect, a demand to flood Israel with Palestinians and end the existence of a Jewish state — precludes the implementation of a two-state solution, the only realistic path to peace between the parties.

AJIRI seeks to dismantle this infrastructure by urging member states to oppose the annual UN resolutions that renew, year after year, the mandate and the funding of these detrimental entities. 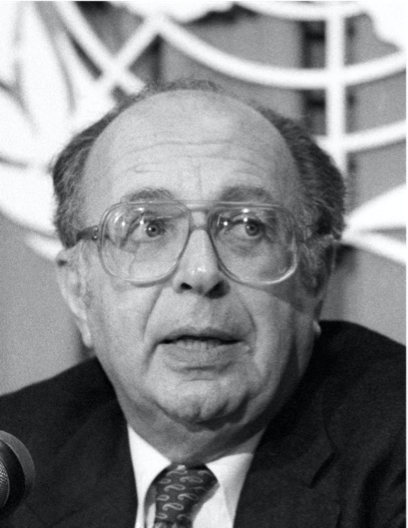 AJIRI was founded in 2005 by Ambassador Richard Schifter, who held a series of senior foreign policy positions in the U.S. government from 1981 to 2001 in both Republican and Democratic administrations.

Those positions included Assistant Secretary of State for Human Rights and Humanitarian Affairs; Deputy United States Representative in the United Nations Security Council with the rank of Ambassador; and United States Representative to the UN Commission on Human Rights and the UNESCO Committee on Conventions and Recommendations. Representing the U.S. in the UN, Amb. Schifter gained an intimate knowledge of the workings of the UN and the efforts made by a group of countries to ignore the humanitarian principles set forth in the UN Charter and instead use the UN to delegitimize Israel.

With that knowledge, Amb. Schifter set out to create an organization to monitor, track, and educate U.S. policymakers and the public about the UN’s activities to delegitimize Israel and to show how these programs can be brought to an end.  AJIRI uniquely focuses on the propaganda infrastructure and the Israel delegitimization apparatus at the UN through the work of the UN’s Committee on the Exercise of the Inalienable Rights of the Palestinian People (CEIRPP), the Division for Palestinian Rights (DPR), and the Special Committee to Investigate Israeli Practices Affecting the Human Rights of the Palestinian People and Other Arabs of the Occupied Territories (SCIIHRP). These UN entities constitute the operational arm of the “Zionism is racism” resolution passed by the UN in 1975 which—just 30 years after the Holocaust—condemned Zionism as a threat to world peace and security, declared that Zionism is “a form of racism and racial discrimination,” and asserted ignominiously that Israel and apartheid South Africa were “organically linked.” While the UN repealed this infamous resolution in 1991 after a major diplomatic effort led by the United States, its detrimental impact lives on in the form of these UN structures and offices – funded by UN member state contributions — that receive little public scrutiny.

B’nai B’rith International, which formed a formal partnership with AJIRI in 2020, is dedicated to improving the quality of life for people around the globe.

Founded in 1843, it is a national and global leader in advancing human rights; Israel advocacy; ensuring access to safe and affordable housing for low-income seniors and advocacy on vital issues concerning seniors and their families; diversity education; improving communities and helping communities in crisis.

At the United Nations since its founding conference in San Francisco in 1945, B’nai B’rith International maintains full-time representation at U.N. agencies around the world.  B’nai B’rith posts on-the-ground representatives at U.N. agencies in cities including New York, Geneva and Paris, and also regularly participates in non-governmental organization (NGO) committees. It is officially accredited by multiple U.N. arms—among them the Economic and Social Council, the Department of Global Communications, and the United Nations Educational, Scientific and Cultural Organization (UNESCO).

B’nai B’rith leaders routinely meet with U.N. officials and ambassadors to discuss priority Jewish concerns such as combating and eliminating anti-Semitism and anti-Zionism; ensuring equality and fair treatment for Israel at the U.N.; highlighting the illicit nuclear ambitions and terrorist activity of Iran; and protecting the fundamental rights and dignity of people everywhere.

Your support will enable AJIRI to expand its research capacity, deliver the message and engage our growing network of contacts and supporters. It will also enable us to be prepared to counter the expanded anti-Israel efforts as well.